AUSTIN, Texas — It’s a device about the size of a small aluminum can, and an Austin widow hopes more police agencies will give it a try to reduce the risk of high speed chases.

Esther Seoanes was widowed in 2012. Her husband James David Williford, 32, was on his way home in south Austin when a car theft suspect, Reynaldo Hernandez, sped through an intersection during a high speed police chase and broadsided Williford’s car.

Hernandez survived. He was sentenced to 55 years in prison. Seoanes, who also has a pending lawsuit against the Austin Police Department, became an activist for change in police pursuit policies and is now a board member of the group PursuitSafety.org.

And in the year that followed the crash, she was there as Austin PD became a test site for the StarChase device.

“I think if they perhaps would have used some kind of a tool like a StarChase device my husband may have been alive today,” she said.

The StarChase system is marketed as a “pursuit reduction technology.” A launching system installed in the front grill of a police car shoots a miniature GPS module that sticks to the back of the car being pursued. Officers can then back off their pursuit and converge on the suspect by tracking the GPS signal.

“What our technology is doing and is proving is that we can enable law enforcement with a different set of tools that allow them to manage situations differently,” said StarChase president Trevor Fischbach. “It reduces the risk tremendously. It changes the entire landscape of a pursuit. It basically removes everything about a pursuit that makes it dangerous.”

In 2013, Austin Police became one of 20 police agencies in 12 states to begin using the StarChase system. Austin received a one-year grant to test the system. In that time Austin Police report that the device was deployed 17 times and that each time the suspect was apprehended without incident.

Austin Police is currently the only agency in Texas using the StarChase device.

“We’re supportive of any technology out there that will help us do our job better and make it safer for our police officers and the public,” said Houston Police Officers’ Union President Ray Hunt. “But money is always the key there.”

The systems cost roughly $5,000 per car. That is one of the reasons the Harris County Sheriff’s Office opted not to install them. A spokesperson also said they questioned the efficiency of installing StarChase on just a few cars in a 700 car fleet covering hundreds of square miles. And although the high-speed effectiveness was also a concern, the StarChase president says officers have reported using the device successfully at speeds in excess of 100 miles an hour.

“Our goal is to make our technology available to as many agencies as possible so that they can reduce the risk for the officer and for people like the Guerreros,” Fischbach said referring to the four family members killed by a driver fleeing police this past weekend in Dickinson and League City.

“I think that it’s a great step in the right direction,” said Seoanes. “And it’s promoting a safer way of apprehending suspects by minimizing pursuit.”

Hunt says officers support added technology that makes their jobs safer. But he says he would also like to see a more blunt instrument in greater use as well.

“These judges have to hammer them. I’m talking about 10, 15 years in prison. If that word starts getting out that when you run from police you’re gonna spend ten years in prison, people start stopping.”

Seoanes and PursuitSafety.org are actively lobbying lawmakers to approve additional funds to get the StarChase system considered for use in police departments across the country. 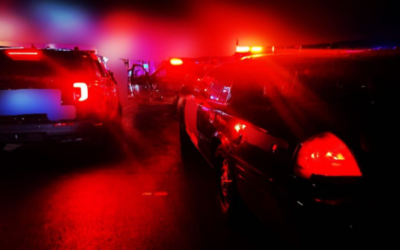